Browse our range of Ukuleles from Kala, Mahalo, Fender, Lanikai, Grestch and many more!

Buy UKULELES online with confidence at Derringers Music. A South Australian owned musical instrument shop offering our best deals on the UKULELES. Delivering to Brisbane, Sydney, Canberra, Melbourne, Hobart, Adelaide, Perth, Darwin, Australia wide. Shipping daily! Find out about our best deals and sales at discount prices. Choose from hundreds of music industry known brands and thousands of products. Can't find it online? Bet we have it in store! Call us on 08-8371-1884. All competitors online and counter prices challenge! Try our best buy, low price challenge. Compare prices, shop online and get your best price from Derringers.

The Ukulele originated from Hawaii and is a part of the lute family of musical instruments. Traditionally constructed of Hawaiian Koa wood and strung with gut strings the instrument gained huge popularity during World War II because of its small size made it highly portable for troops. During WW2 a boom in the production of ukuleles saw the instrument venture from the traditional Koa to be made by a variety of available timbers. Of these alternative timbers, Mahogany became one of the most popular choices. The original Hawaiian instruments were built in a range of sizes loosely following a similar string scale length as bowed instruments like the violin, ranging from the smallest Soprano through to Concert, Tenor, and Baritone. Modern ukuleles are even more varied ranging through to custom sizes just smaller than a half-sized guitar. With the modern ukulele, gut strings have given way to nylon strings as found on a classical guitar.

Conventionally the ukulele is tuned in the same intervals as the top four strings on a guitar with the fourth string tuned an octave above. A chord shape on a guitar's higher four strings is exactly the same as a ukulele but five tones higher. That means a guitar fitted with a capo at the fifth fret produces identical chord shapes. Everything a student learns on ukulele can be moved to guitar with ease.

Modern variants of the traditional family of soprano, concert, tenor, and baritone instruments have been expanded to include Guitarlele and Ubass (or Ukulele Bass) instruments. Originally shaped and constructed like a scaled-down classical guitar, ukuleles can now be purchased in a variety of novelty shapes mimicking electric guitar and even pineapple and skull shapes. Other ukulele variations include the Banjo-ukulele (Banjolele), Resonator Ukulele or traditional guitar shapes with a cutaway for playing high up the neck and also sophisticated pickup systems.

Schools who traditionally taught the Recorder (wooden whistle) as the basic instrument are now moving to the ukulele as a more versatile and fashionable instrument.

The standard Ukulele sizes are:

Some famous musicians have been known to have originally composed some classic Hit Songs on ukulele including Paul McCartney and George Harrison, the latter composing the immortal love song "Something [in the way she moves]" on ukulele.

Most capital cities and large regional areas in Australia have Ukulele social groups such as the Adelaide Ukulele Appreciation Society.

Whether you are a Wahini from Waikiki or Uke Skywalker from Tatooine, you cannot have too many Ukeleles.

Fender is an American brand of stringed instruments and amplifiers, arguably the most widely played of any one brand on earth. They produce acoustic guitars, amplifiers and P.A. equipment, but you probably know them for its solid-body electric guitars and bass guitars, particularly the Stratocaster, Telecaster, Precision Bass, and the Jazz Bass. The company was founded in Fullerton, California, by Clarence Leonidas "Leo" Fender in 1946. Hundreds of thousands of albums have been recording with Fender gear, and we love it all here at Derringers! Whether you want to begin your musical journey with your first guitar and practice amp, or buy the last guitar you'll ever need (as if that were even possible ;P), there's something from Fender to inspire you!

We have a complete range of Fender gear, pallets of it arriving every week, and have over 40 years experience playing and loving them, so browse the range online here at Derringers and find your next guitar or amp! Shipping nation-wide daily! 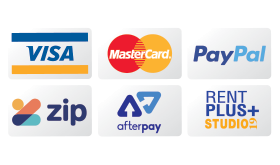